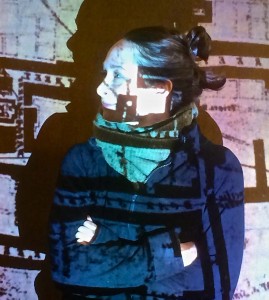 On 2nd March 2015 Sophia Mosley was officially appointed as mentoree to Peter Walker. After initial meeting and an informal interview held at Lichfield Library, during a community engagement art project which was commencing that day, Sophia was chosen on the merits of her C.V. and ability to work alongside the artist. Firstly the position involved attending the artist’s studio, based in Shrewsbury, for two full days in order to participate and view the working practice of the sculptor in his daily regime. Upon arrival Sophia was shown around the studio to become familiar with the physical space and types of work that are undertaken in the studio.   Then through conversation with the artist Sophia was gave insight into the forthcoming annual projects that were due to commence and within which the mentoree position would be able to contribute with in the coming months.

Throughout the two days Sophia was able to assist Peter Walker as he began the construction of a 4ft sculpture. Sophia was taught how to place clay onto the armature of a sculpture and began working to build up the piece with the artist. Due to the cold climate in the studio space, Sophia was given extra layers of clothing to wear and learned about the practicalities of the working environment.

The studio also had a visiting artist, Composer and Sound artist David Harper, whom was working alongside Peter Walker on a sound and light installation piece for a forthcoming exhibition. Sophia was able to see and hear the new media that was being used to produce the artwork. Sophia was able to explore the conceptual work of the artist and investigate how sculpturally sound and light could be used to portray creative ideas.

Throughout the time of visiting, creative ideas were discussed between the artists as they worked in collaboration in the studio. Peter Walker and Sophia through this time were able to discuss the different ways in which art may be produced, how artistic concepts can be explored and represented, and the different ways that artists run their businesses highlighting the importance of this in the art world.